Really smart and quite sane people can believe not-so-smart and way-too-crazy things. When I’m driving at night I often turn on the car radio to keep myself awake. Invariably, I stumble across a late-night program entitled “Coast to Coast AM,” an interview program that features nightly discussions between host George Noory and “experts” in esoteric and bizarre subjects like UFO abductions, hauntings, conspiracies, the search for Bigfoot, crop circles, remote viewing, the paranormal, etc. The 3-hour showcase of human credulity airs every night (yes, every night) over 570 stations and boasts 3 million listeners. I am always entranced by the show, unable to change the dial as I sit in stunned amazement listening to quite serious guests (often scientists with PhDs) as they describe in intricate detail their close encounters with aliens, mythical beasts, or ghosts:

“There I was, face to face with the chupacabra. It was clearly the Puerto Rican variety because the mainland chupacabra has closer-set eyes and a narrower snout. I’ve seen the latter many times, but this was only the second time I’ve encountered a CC (Caribbean Chupacabra), as we at the CRC (Chupacabra Research Center) call them. He eyed me warily as he munched on a Moon Pie and slurped down a Big Gulp, probably Dr. Pepper because they prefer cherry-flavored colas, but the caffeine and sugar seem to make them edgy and studies show that it actually alters their mating season, shifting it back by up to six weeks. Chupacabras are normally vegetarians but will occasionally hunt and eat small rodents. This one had a brown stripe on his back, likely a burn mark incurred as he was beamed aboard the mother ship during the invisible invasion of 2011….”

I always find the program riveting, not because I believe a word they say (I don’t), but because I am utterly transfixed by the fact that anyone believes them! I often wonder about the host, George Noory, who laps up every insane story with gushing statements like, “That must have been terrifying for you!” and “You were so lucky he didn’t attack you!” Is there NOTHING so crazy that even Noory wouldn’t believe it? Apparently not. As Upton Sinclair quipped, “It is difficult to get a man to understand something when his job depends on not understanding it.” I guess I shouldn’t be so surprised.

THE NEVER-ENDING SEARCH FOR PATTERNS, REAL OR IMAGINED

The human brain is wired to believe. Our minds conceal a predilection for connecting bits of data, even when they are completely random and unrelated. Life becomes, in a sense, like one of those connect-the-dots books I filled in as a child, but without the numbers so that the dots may be connected in any sequence to arrive at whatever outcome one imagines. Superstitious people thousands of years ago drew imaginary lines between randomly scattered specks of light in the heavens and then filled in the missing information to form “constellations:” a goat, a bull, a crab, a scale, a fish, a hunter and so forth, then infused those fantastical images with meaning. In the same way, our brains daily reach out to connect things that are better left unconnected. Other than the big dipper, which really does look like a dipper, not one of the heavenly constellations even remotely resembles the sign it supposedly represents. Below is a photo of the heavens containing the constellation Leo, juxtaposed with the same part of the sky bearing a superimposed lion over nine of its brightest stars. This “informs” the astrologist that those born as the sun rose in Leo will be unusually brave. 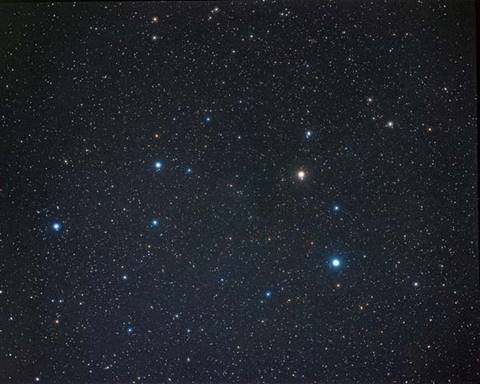 Of course, one could just as easily string the dots together differently to form a snake, then name the constellation Lucifer and conclude that all people born under that sign are evil. Or we could remove the lion picture and replace it with a rabbit, name the constellation “Fluffy,” and predict that all “Fluffies” will have lots of children. Now, that would be a sign you would prefer to avoid mentioning to potential suitors in a bar!

The woman: I’m a Fluffy.

The man: I just remembered I have to take my cat to the orthodontist right now! His fangs are coming in crooked. No, really. I wouldn’t make this up just to avoid having twenty children. I’m not that type of guy! Come on! Ya’ gotta believe me!

The truth is that one can see almost anything in those nine stars. (If I squint, I’m pretty sure I can see the Spice Girls!) What is true of the stars is equally so here on this planet. We are driven to seek patterns where there are none, then extrapolate from those imagined patterns to identify cause-and-effect relationships that simply don’t exist. But why?

ONLY THE PARANOID SURVIVE

We are undoubtedly the descendants of people who connected the dots, not of those who failed to do so. Consider Og, a hypothetical caveman who lived ten thousand years ago. Og hears a noise in the woods and leaps to the conclusion that an unseen predator lurks in the bushes ready to pounce. He flees the scene at once and lives not merely to tell the tale, but to pass on his believing genes to a new generation. Note that Og would survive whether the noise turned out to be a hungry lion or a harmless squirrel. In either case, the believer lives to procreate at a future time. On the other hand, consider his companion Grog who hears the same noise but brushes it off as nothing. He remains at the scene as fraidy-cat Og scurries back to the safety of home. Sometimes Grog is correct and lives to mock his paranoid friend. But eventually Grog turns out to be wrong and is summarily devoured, removed from the gene pool, and placed in line for a Darwin Award.

Thus, those who connected the dots – even if they were wrong – lived to procreate, while those who failed to do so became Caveman Mcnuggets. The doubting gene was in this manner gradually weeded out of our DNA, or rendered progressively more recessive or uncommon. Voila! We are a species of believers. This is an essential component of our nature, but the very quality that protected our progenitors can, ironically, become quite damaging to us today. While Og, the caveman, was not harmed by fleeing at the sound of a noise that turned out to be merely a rabbit, we who live today are often harmed by our false beliefs. I call them “Grand Illusions” and they can be deadly. That is the point of this series of blogs.

THE DANGER OF BELIEVING WACKY THINGS

Steve Jobs of Apple fame was diagnosed with endocrine cancer in October of 2003, but rather than undergoing immediate surgery to remove the tumor (which has an almost 100% success rate if detected early), he opted instead for nine months of “alternative therapy.” By the time he finally agreed to surgery in July of 2004, the cancer had ravaged his liver so completely that he was forced to have a transplant. We’ll never know for sure, but that delay may well have cost him his life and robbed the world of a rare genius. He connected dots (alternative therapy to healing) whose correlation is tenuous and unproven and his belief may have cost him everything.

Or consider the case of David and Ginger Twitchell, who are (or, at least, were in the 1980s), devotees of Christian Science, a cult founded by Mary Baker Eddy in their hometown of Boston, Massachusetts in 1879. The sect (which is only marginally Christian and not at all scientific) eschews medical treatment on the grounds that prayer alone is sufficient to heal the sick. On April 4, 1986 the Twitchells’ 2-year-old son Robyn became ill with an obstructed bowel, a condition that could have been easily remedied at any of the fine hospitals in the area. But the Twitchells didn’t believe in doctors and hospitals; they believed in the healing power of prayer. So they prayed. But instead of getting better, peritonitis set in and after four days of agonizing pain the toddler died. The parents were convicted of involuntary manslaughter for their neglect, a charge that would later be overturned on a technicality.

So be careful what you believe. A healthy dose of skepticism is, well, healthy.