GRAND ILLUSIONS CHAPTER ONE: THE BIRTH OF A PSYCHOLOGICAL ILLUSION 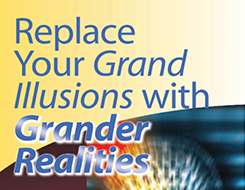 It was one of those rare, once or twice-in-a-lifetime epiphanies, a flash of insight that was – I would learn later – to become a hinge on which my adult life would turn. I was in my mid-thirties, and had been in the ministry or preparing for it since I was 16. I was the Senior Pastor of a robust, rapidly growing congregation that I had founded several years earlier. Well over fifteen hundred people attended each Sunday morning, and they seemed to be flourishing under my leadership. I, on the other hand, was becoming disenchanted with the whole operation.

Constant opposition by a small, but vocal faction in the church had left me bloodied and looking for a way out. Withering criticism for almost everything I did (or didn’t do) had long since drained most of the joy of my work from my spirit. I could sense a strong and curious desire to jeopardize my ministry by pushing the envelope of acceptable “ministerial” behavior. I started businesses and devoted more and more of my time to them. I attended movies – knowing that I might be spotted in the crowd – that a few very conservative people might consider inappropriate for a pastor to see. I refused to wear clerical garb and challenged ecclesiastical traditions that I regarded as silly. Like a moth I was drawn ever more dangerously close to the dancing flame.

All of this, I can see now, was an unconscious effort to get myself thrown out of the ministry, as I couldn’t muster the courage to simply resign and walk away. I confided in a friend at that time, “I’m really disillusioned right now.” I had no idea that the words he was about to speak would grow to become a guiding principle of my life, and the subject of the book you are about to read. “You know what disillusionment means, don’t you?” he replied. “What?” I asked. “It means that you’ve been living under an illusion.” The flash of insight began at that moment. He continued, “The very word ’disillusioned’ implies that you were deceived before.”

It seems incredible to me now that I, who had been fooling people on stage as a magician for many years as a sideline from my duties as a minister, had never recognized this simple fact. Disillusionment is good, because it represents the end of a period of deception. As it turned out, the very principles I had used to trick hundreds of audiences with the art of legerdemain were being used by my own subconscious mind to deceive myself. I was, as I believe all people are, in serious need of a good dose of disillusionment.

The most commonly understood technique used by prestidigitators to fool their audiences is the optical illusion, the art of using paint, trim, lighting and design features to make something look quite different from what it actually is. All of us have seen drawings that deceive the eye: stairways that go up and down simultaneously, stationary objects that appear to move, straight lines that seem crooked. While the objects pictured could never exist in reality, the clever drawing illustrates the manner in which we allow our minds to play tricks on us. Because our brains have no category in which to place a dot that is both stationary and moving, we must “file” it in our memory banks under one classification or the other. And how do we choose? We naturally select the option with which we feel more comfortable, ignoring all contradictory information. And thus an illusion is born and nurtured.

When faced with conflicting data on an important subject our minds, if undisciplined by the will, take the path of least resistance. Information flows through well-worn ruts in our brains, like rainwater toward a stream, into familiar pools. In this way, we tend to reinforce our prejudices and long-held assumptions rather than allowing them to be challenged by new (and possibly better) information. Some of these rock hard assumptions may be eventually eroded away by the steady drip, drip, drip of years of contrary input, but most remain unyielding unless a moment of truth, a catalyst toward disillusionment, intrudes to shatter them almost all at once.

Among Oliver Wendell Holmes’ more profound remarks was this one: “The mark of a civilized man is his willingness to re-examine his most cherished beliefs.” Apart from this willingness to reassess and reconsider long-held assumptions, illusions inevitably congeal and harden. Like concrete, they undergo a curing process that can continue for decades, and with each passing year they become more intractable and less susceptible to change. These illusions manifest themselves in a skewed point of view, a way of looking at the world that conveniently ignores contradictory data even as it builds to overwhelming proportions.

While I was in the ministry, I was deeply troubled by the ability of otherwise intelligent people to tenaciously embrace beliefs that were patently absurd. To be fair, I had been among them in my earlier years. I am not referring to the core doctrines of Christianity which can neither be proved nor disproved, but to peripheral beliefs that are clearly untrue. For example, there were those who believed passionately that the world was only 6000 years old, despite incontrovertible evidence to the contrary. Others would walk confidently into my office and tell me that God had told them the future, making specific predictions that never came true. Undaunted, they would confidently make even more outlandish prognostications, ones that would eventually prove false, as well. Nevertheless, they still refused to re-examine their belief system.

The most salient example of this phenomenon was the small group of faith-healing aficionados in the congregation. Some of them carried vials of olive oil with them to dab on the foreheads of ailing people before proclaiming them healed. When the “healed” person later died, they would simply move on to their next patient, insisting that death was a form of “ultimate healing,” one that ended all pain and suffering, and that their prayers had been answered after all. It amazed me how quickly (and conveniently) they forgot that their prayer had been for the person to be restored to health and go home to their jobs and families, not to be taken immediately to heaven. If they felt uncomfortable with this obvious discrepancy, they never said anything about it to me. Rather, when I questioned them about the effectiveness of their methods and the genuineness of their healings, they explained away the facts and doubted my faith.

I frequently marveled at popular faith healers (and their credulous followers) on television and wondered, “If this person can heal, why don’t they just go the oncology ward of their local hospital and send all of the various cancers there scurrying into remission? Why don’t they go to the school for the blind, or deaf, and heal everyone there? Why not go to the local Veterans Administration Hospital and restore the limbs of amputees?” By so doing, they could easily and instantly prove that their healing powers were legitimate. I was convinced that faith healers avoided the critically ill or permanently disabled because they secretly feared (or perhaps knew) that there would be no healings in such people, and that they would be faced with the unavoidable truth: their “careers” were based on a fantasy.

Far safer it was, they subconsciously reasoned, to “heal” people with curable diseases who might get better anyway, or to pray for the recovery of hundreds of people in a coliseum who didn’t know each other and therefore couldn’t compare notes afterward to see who, if anyone, got well. But illusions need not be of a religious nature. As a pastor, I was merely in a position to observe closely the resistance to objective reality that existed in some devout people.

Since leaving the ministry, I’ve seen such denial in many other places, as well. The same tendency to ignore reality in favor of illusions is common in business, politics, relationships, and personal life. Unwilling to challenge their core belief system, politicians continue to espouse policies that have measurably failed for decades. Business-people repeat the same mistakes over and over, hoping for better results. Spouses go through several marriages telling themselves each time that the fault lies with their partner, ignoring the consistent pattern that is obvious to everyone else. All such people, and all who will read this book, share a common inclination toward perpetuating our misconceptions rather than enduring the sometimes painful process of replacing them with the truth.

“Tell me lies. Tell me sweet little lies….” So goes the 1988 classic song by Fleetwood Mac. A similar refrain reverberates in the hearts of millions of people as they awaken each day to face their world. Like a loop tape, it plays over and over again the same lyric: Don’t tell me the truth; I can’t take it. Please tell me lies. We repeatedly hear and internalize this message from our youth, and we learn to seek out any message that serves our own purposes or reinforces our prejudices. Fearful of truth and its implications, we frequently are content to tell ourselves sweet little lies to soften the blows of life, or reduce its demands on our time and resources. In so doing, we sentence ourselves to repeat our errors and waste years of our lives. We all could stand to be disillusioned.