HORRIBLE BOSSES, LOVABLE LEADERS AND EVERYTHING IN BETWEEN 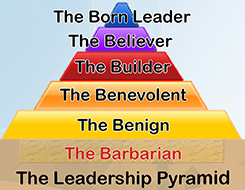 I once had a barbarian for a boss. He hovered over each employee like an angry schoolmarm, barked out orders like a drill sergeant and reviewed all my work with a skeptical eye as though I might be trying to pull the wo ol over his eyes. He was constantly on guard lest one of us make off with some office supplies, linger an extra minute or two in the bathroom, sneak out the back door for a momentary respite or just stop for a moment to chat with a co-worker. He didn’t trust us, which led some employees to respond by becoming untrustworthy.

The more the Big Bad Boss sought to control them, the harder they searched for ways to get away with something. Rather than doing their best with a joyful spirit they worked half-heartedly, and only when he was watching. The boss disliked his employees, and they hated him. His distrust became a self-fulfilling prophecy. Rather than getting the most out of his people, which was his intended goal, he got far less. Mere bosses rarely get much from their people. Being a boss is like running a cemetery: you’ve got a lot of people under you but no one’s listening. Many CEOs I’ve encountered at my speaking events have yet to learn this lesson. I guess the people who promoted them were pretty clueless, too.

While I’ve never been employed by a great leader, I’ve had the privilege of being mentored by a few, and the difference was stark. Without anger or threats they inspired those around them to toil late into the night, to give their best effort and to enjoy every minute of it. They appealed to people’s nobler motives and better natures. They spoke of the glory of accomplishment and led by example. More importantly, even when the leader took a vacation, or moved away or retired or even died, the employees kept right on working with the same vision and passion.

FROM BOSS TO LEADER

For many years I’ve been contemplating, defining and codifying the differences between a mere boss and a true leader, trying to tease the most salient distinctions from a raft of data and experiences. But no one expressed the point more succinctly than an 11-year-old boy in my Boy Scout troop (Troop 61, Austin, Texas) did a couple of years ago. In trying to teach him how to be an effective leader (Boy Scouting is, in effect, a laboratory in which to train boys to become leaders), I asked him about the difference between a boss and a leader. His reply? “A leader leads people and a boss just bosses them around.” Fair enough. But how do you transform yourself from one who feels compelled to shout orders to people who don’t want to obey them into one who inspires others to eagerly do what needs to be done of their own initiative?

HOW TO BECOME A BORN LEADER

Dwight Eisenhower delivered the best definition of leadership I’ve ever heard: “Leadership is the art of getting the other guy to do what you want him to do because he wants to do it.”  That, in a nutshell, is the difference. Bosses find themselves in the very uneasy position of using a series of carrots and sticks to persuade employees to do things they would rather not do. They must somehow convince workers that their lives will be less miserable if they obey than if they disobey; the boss will surely see to that! But a leader appeals to the workers’ inner desire to accomplish worthwhile goals. A leader’s primary objective is to build people, not to use them. My newest keynote program is entitled, “How to Become a Born Leader.” The self-contradictory title (what else would you expect from a funny motivational speaker?) belies the fact that “born leaders” weren’t born that way at all. They exhausted years climbing what I call “The Leadership Pyramid.” When one finally arrives at the summit, those uninformed souls who remain clueless of the steep price paid along the journey blithely assign their trailblazer the title of “Born Leader.” Nothing could be further from the truth. As Eddie Cantor said, “It takes 20 years to become an overnight success.”

The climb begins with the Stage 1: The Benign Boss (thankfully, most skip the “Barbarian” stage). The benign boss is like a benign cyst: just there. The benign boss does little good or harm. He doesn’t manage people; he only manages schedules and inventories and payrolls. He is largely ignored, because he is easy to miss. Employees wonder to themselves if they couldn’t do a better job. I call this Stage Zero of the Leadership Pyramid. (Barbarian is Stage Minus One, because this person actually makes the company worse.)

Stage 2 is the Benevolent Boss, one who is kind, caring, friendly and well-liked. Employees don’t mind working for this person, and try to help out when they can out of personal friendship. Stage 3 is the Builder, one who sets the pace by outworking everyone else, organizing people and processes, and building functioning teams. The organization clearly moves forward and employees acknowledge that the right person is on the job. Somewhere in Stage 3 the threshold is crossed between boss and leader. Stage 4 is pure leadership.

In Stage 4, the “Believer” has shifted priorities. The Stage 4 Leader is primarily engaged in developing people to become future leaders. As famed GE CEO Jack Welch said, “Before you are a leader, success is all about growing yourself. When you become a leader, success is all about growing others.” The leader at this level believes so passionately in his people that he freely gives away his power and inspires them to reach for new heights and to fulfill their full potential.  It is only after spending years fulfilling stages 2, 3, and 4 that employees slowly (even unconsciously) elevate their leader to Stage 5, the pinnacle of the pyramid. They move from respecting, to loving, to revering him or her. They naively call their now-legendary boss a “Born Leader.”