HOW TO BE FUNNY (PART I) 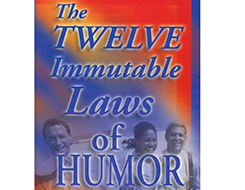 It was every young speaker’s worst nightmare, especially one who viewed himself as a funny motivational speaker. I was giving my first public speech, opening with the obligatory extraneous joke. I’ll never forget delivering the punchline, and hearing that spontaneous burst of… silence. Not a chuckle could be heard. Even two teenagers in the back row who had been giggling throughout the meeting at their own private conversation stopped laughing! Everyone stared, some having no clue that I had even attempted to make them laugh, others quietly empathizing with my embarrassing plight. I later realized that my joke had bombed terribly, not because it was a bad joke (it’s actually a great one), but because I had unknowingly violated the first law of humor.

Years later, I wrote a book called The Twelve Immutable Laws of Humor. I had studied the world’s funniest people and discerned twelve behaviors employed by all of them, practices just about anyone can learn and implement even if they aren’t naturally funny speakers, themselves. I incorporated 100 jokes into the book and demonstrated how the twelve laws apply to each one. You can buy that book here, or get a summary of each law over the next many months as I blog about them. The first law (the one I broke in that first speech described above), is the Law of Abandonment.

I had told that story as though I was uncertain whether it was really funny or not. I did so in order that I might somehow save face if the story fell flat. I, like all unseasoned speakers, reasoned unconsciously that if the audience didn’t think my story was funny, they would at least credit me with the good sense to know that it wasn’t funny. It seemed reasonable that I could limit the damage to my ego in this way. After all, it is certainly better to be considered merely humorless, than humorless and dumb, as well. Regrettably, this tactic never works.

When a story is told with reservation, those in the audience don’t laugh. On the contrary, they wonder why the speaker bothered to tell the story in the first place. The sharks can smell the speaker’s fear a mile away, and they perceive him or her as under-confident and timid, as well as humorless and not-too-bright. For this reason, the law of abandonment is crucial. It is the most potent weapon in the speaker’s arsenal, a Patriot Missile guaranteed to intercept his or her next bomb.

The law of abandonment can be compared to deliberately climbing out on a limb with the intention of sawing it off. When telling a joke, you must commit yourself to it with reckless abandon, never entertaining a thought that the joke might fail to evoke hysterical laughter. If the audience thinks you’re not absolutely sure your story will make everyone laugh, they probably won’t even crack a smile, for two reasons.

First, most people are self-conscious. Consequently, if you don’t communicate non-verbally that your story will make everyone laugh, each person will fear the embarrassment of being the only one laughing. Therefore, each will choose not to be the first to laugh. And, of course, if no one is willing to be the first, no one will be second, either. Communicating through your demeanor that your story will result in an instantaneous burst of laughter reassures the audience that there is no danger of embarrassment.

The second reason people fail to laugh when the law of abandonment is violated is this: most people are fundamentally polite, and will be reticent to laugh at your story for fear of hurting your feelings. You see, if the audience is not certain that you believe your story is funny, they won’t laugh – just in case the story might be intended as a serious one. For example, if you were to tell an audience in deadpan fashion that you fell down the steps in front of your house, people would have no way of knowing whether to laugh at your clumsiness or empathize with your pain. The audience fears that if they burst out laughing, you might well follow with a sentence like: “I broke my arm in three places and lost my career as a concert pianist.” The audience has to be certain that you’re trying to tell a funny story or, in fear that you might intend it as a serious one, they will choose the safe bet: waiting silently until they know for sure.

So how do you communicate to your audience that your story is intended to evoke laughter instead of sympathy? One way would be to use the standard old line, “A funny thing happened to me the other day …, or I heard a great joke last week ….”
However, this is an amateurish and unnecessary approach. A funny motivational speaker uses a more professional approach.

The best way to inform the listener that your tumble down the steps was comical, not tragic, is through non-verbal communication. So when telling a funny story, smile, change your cadence, exaggerate your facial expressions, tell your story in “joke format,” etc. When you’re trying to be funny, be very funny. When you’re telling a serious story, be very serious. Otherwise, your audience won’t know how to respond, and they will sit stone-faced in response to even the funniest of stories. Make sure that your audience knows for certain that you are telling what you believe to be a hilarious story. This is the Law of Abandonment. Next month, I’ll explain the Law of Inflation.