HOW TO BECOME A BORN LEADER BOOK NOW AVAILABLE! 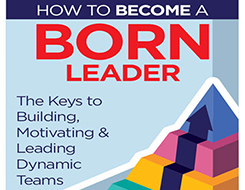 Purchase Billy Riggs’ book, How to Become a Born Leader, by clicking on Store above and choosing “Books.”

A boss and a leader are wildly different creatures. Though millions occupy both roles simultaneously, it is utterly commonplace for an individual to be one, but not the other. A host of great leaders fill no position of authority, possess no rank, wield no power, and bear no title at all. Many bosses, similarly, are decidedly not leaders. The distinction between the two may sometimes be observed in the hearts and minds of those being led more easily than in the appearance of the one in charge.

A boss lurks behind workers to prod, goad, bribe and threaten until they finally relent and carry out their assigned duties. Like mice in a laboratory they obey in hopes of receiving a food pellet, a shot of dopamine, or a pleasurable stimulus from electrodes embedded in the midbrain. Others hurl themselves toward the desired objective driven to avoid yet another painful electrical shock. A mere boss often equates yelling with motivation and must stand guard like a warden knowing that if the cat is away the mice will play. Harried and harassed employees merely go through the motions, do their work devoid of internal motivation and live for their weekends. Few are happy in such a workplace, and no one finds fulfillment there.

A leader, by contrast, burrows into the hearts of employees and sets them afire with a desire to do their work. The leader’s role is to ignite a spark in each worker’s heart, then fan it gently into an inferno of passionate effort toward a mutually longed-for objective. When this transformation takes place, work ceases to be feel like drudgery and is transformed into a common mission. How to Become a Born Leader (by Billy Riggs) offers a road-map to wean managers away from the carrots-and-sticks approach and to empower them with tools to motivate workers from within.

I’ve used the formula described in How to Become a Born Leader to build one of the fastest-growing churches in America, a Boy Scout troop that exploded in size and effectiveness, and hugely successful nonprofit organizations. The principles it describes will work well in any business, school, organization or nonprofit, because leadership remains the same across all human institutions. In any endeavor, leadership is the art of inspiring others to do something you want done because they want to do it.

As you read, you’ll find yourself thrust into a centrifuge and spun until the weightier qualities of a leader have been separated out and the superficial features of a boss may be cast off, leaving only pure leadership behind. Years later, those uninformed souls who never witnessed your transformation will stand in awe of one they mistakenly call a “born leader,” one who exerts an almost magical spell over those being led. Leaders are not born, but built as you scale the Leadership Pyramid. Scale it you must, because almost every organization rises or falls to the level of the ability of the leaders to lead it. Happy reading.