MY THOUGHTS ABOUT TEACHERS’ UNIONS 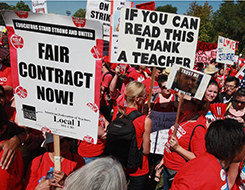 Over a ten-day period in August, 2019, I was the keynote speaker for 9 opening convocations (that’s a kick-off rally for faculty and staff held in most public school districts just before classes start) in four states, almost all of which resulted in standing ovations from the assembled district employees. Teachers, especially, fairly beam as they tell me how inspiring it was to be powerfully reminded of the positive difference they make in student’s lives, and how refreshing it felt to be reminded of the importance of their mission.

I encourage them to “flip a switch” in their minds when they go to work (just as I do before I walk out onto any platform to deliver a speech) to be sure they’re not working for a paycheck, but to fulfill a meaningful objective: improving lives. You can imagine my surprise, then, when I received an email last weekend alerting me to a Reddit thread viciously attacking me over a program I’d done the day before, one of the very ones that had resulted in a standing ovation from 1000 educators.

My offense? I had merely suggested that teaching is not a mere job like selling aluminum siding; it’s more important than that. It’s a calling. It’s one of the few professions in which you can draw a salary (though rarely a high one, sadly) while simultaneously pursuing a noble mission. Most human beings have to volunteer their time after work or on weekends to gain just a fraction of the personal fulfillment teachers can enjoy while earning a paycheck at the same time. To read that irate teacher’s post, though, you would have thought I had spent the entire hour drowning kittens and clubbing baby seals!

One teacher who had been present that day (and who had, quite certainly, not participated in the standing ovation), unleashed an online pyroclastic flow of vitriol toward me in a long post entitled, “Billy Riggs is a piece of sh*t!!!” I was stunned by the cascading wave of profanity, insanity, hatred, blind fury, idiocy and lies. They should rename Mount Vesuvius after this lady, for her boiling, blistering, scathing tsunami of nonsense could have buried three cities the size of Pompeii. Every statement I had made in my speech had been twisted and parsed in the most negative way imaginable.

I was accused of suggesting that teachers should work for free [That’s insane. I’m on the board of my local school district’s education foundation in order to help raise funds to assist teachers. My sister and her husband were both, until recently, teachers in the public school system. I’m devoted to public education.] The most ludicrous accusation made by the crazed teacher was that I was clearly a “union buster” brought in by the district superintendent to destroy the teachers’ union. If I hadn’t been so wounded and nonplussed by her verbal violence I would have laughed out loud. I’m not even sure if such a role exists outside the movies. I’ve certainly never met one.

I’d never really thought much about teachers’ unions, certainly not enough to write a cogent position statement, but the episode did cause me to at least attempt to do so in this blog. In my view, teachers’ unions are a mixed bag of good and bad. Some districts manage to cling only to the good, while defenestrating the bad. Others, sadly, face the exact opposite. Most must endure the ill effects in order to enjoy the benefits.

There’s no question that negotiating a handful of contracts rather than hundreds (or even thousands) of individual ones is time and cost effective for everyone. Money that might be spent paying HR directors to negotiate a contract for each and every employee over many weeks can be instead devoted to other priorities, perhaps even providing a needed pay increase for teachers.

A second benefit is the role the union plays in protecting teachers from unfair attacks. School administrators often find themselves under intense pressure from parents, board members, or powerful community interests to reprimand or punish a given teacher. Even if a principal disagrees with those exerting the pressure, he or she might find no suitable escape other than to unfairly penalize the innocent educator. In such situations, it’s good that there is a strong union to offer a shield of protection. I like that.

In my experience, teachers’ unions (certainly the state and federal ones, if not the local ones) run the danger of creating bitterness. The teacher who chastised me online is a quintessential example. By constantly (and sometimes angrily) denouncing administrators as oppressors who do not care about teachers or their salaries, union leaders can inadvertently (or perhaps intentionally) create a victim mentality. Years ago I watched a news program which covered a teacher strike in New York City. One of the teachers unleashed an expletive-laced tirade of unrelenting fury toward an administrator on TV. The man’s face was beet red and spittle flew from his mouth as he vented his almost primeval hatred. I was so viscerally impacted by that scene that it left a bad taste in my mouth regarding teachers’ unions in general.

I’m uncomfortable when union leaders promise to “fight” for their members. It’s the verb that bothers me. It implies that the administrators and school board members are somehow the enemy. They’re not. They’re just good people trying to educate kids, too, but who are also tasked with balancing budgets with limited resources. How about “advocate” or “negotiate?” I prefer words like those. If union leaders constantly remind themselves that the real enemies are students’ ignorance, apathy and poverty, perhaps the anger and bitterness can be averted. It’s okay to be friendly rivals during negotiations, but once the school year starts the focus must be on our shared goal to improve the lives of the students.

Unions seem to encourage (or at least wink at) the belief that teaching is just one more profession, no more significant than selling insurance or driving a UPS truck. I disagree. Just as there’s something unseemly about a TV preacher who poses as one who cares but really does it for the money, it seems a bit dishonoring of the teaching profession to focus on the almighty dollar. I’m all for sincere preachers getting paid, and for teachers to earn good salaries. But it just doesn’t feel right to me when such an issue is made of it, especially with visceral rage. Everyone is happier, in my opinion, when they discipline themselves to try to find a higher purpose in their work than a mere paycheck. To me, this principle seems truer of preachers and teachers than it is of those who sell appliances or hang Sheetrock.

My second friendly critique of teachers’ unions is their occasional insistence on protecting even the tiny fraction of teachers who shouldn’t be protected. In New York City, at any given time about 700 teachers are being paid their salaries to sit in so-called “rubber rooms” and do nothing all day. They have all been accused of offenses that require them to be removed from their classrooms, but union rules make it so hard to fire them that the New York City Department of Education pays out $65,000,000 (yes, million) every year to keep them on the payroll while they await disciplinary hearings… sometimes for years. They not only draw their full salary and benefits, but they get their summers and holidays “off,” as well.

I’m all for due process. No one wants to penalize teachers who have been falsely accused. However, once guilt has been established, shouldn’t we be able to fire them and distribute those millions toward raising the salaries of those who remain in good standing? Or to buy textbooks or to renovate old buildings? Shouldn’t we at least be able to schedule the hearings within a couple of weeks? Union regulations make it difficult to do so, and anyone who challenges those rules is likely to face a torrent of abuse too stiff to make it worth attempting. Administrators are intimidated into silence rather than doing what everyone knows ought to be done.

I’m all for teachers’ unions, provided they see themselves as teammates with administrators, discourage anger and bitterness, and refrain from defending the occasional bad apple that clearly doesn’t deserve it.

TO LEARN HOW BILLY RIGGS CAN TURN YOUR NEXT IN-SERVICE INTO ONE THEY’LL LAUGH AND TALK ABOUT FOR MONTHS, CLICK HERE.