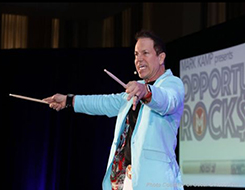 What can rock stars teach us about life and business? Plenty, Marvelless Mark Kampaccording to my friend and colleague, “Marvelless” Mark Kamp. Mark is a former D.J. and Las Vegas headliner who impersonated celebrities onstage. He’s also made it his mission, as a keynote and motivational speaker, to teach the business world the valuable lessons rock stars impart to those willing to observe and study them.

KISS – This bizarre band founded in the 70s carved out its niche in the rock genre by daring to be, well, bizarre. They wore spandex, painted their faces to resemble demons, animals, or space aliens, and even received tongue implants to create a riveting impression. Their concerts featured fire breathing, smoking guitars, levitating drum kits, blood spitting, and pyrotechnics. Whether fans loved their antics or hated them, you couldn’t possibly forget them. Obviously, enough people enjoyed their unique style to make them world famous and fabulously wealthy.

AEROSMITH chose a different type of creativity and innovation. Rather than simply dressing or behaving in an outrageous manner, band members resurrected their floundering careers by creating an entirely new genre of music. Daring to break with purists by violating a sacred tenet of rock ‘n’ roll, they partnered with rappers Run-DMC to create the hybrid (rap ‘n’ roll?) hit song, Walk this Way.

THE ROLLING STONES are as much a living metaphor for teamwork as the Golden State Warriors. For almost six decades, their credo has been “put the band first.” Though Mick Jagger and Keith Richards remain the two biggest stars, the other band members have rotated in and out over so many years. Through it all, they have made it their practice to “check your ego at the door,” as Jagger puts it. Moreover, he has always gone out of his way to call attention to and praise all the members in the band.

LADY GAGA makes it her habit to challenge her staff every day with the question, “How are we going to be brilliant today?” She lives it out by creating a style that is wholly her own. Not content to establish her uniqueness by outlandish outfits only, she restricts herself to recording songs that meet rigorous guidelines: 1) Every song must be sung in a minor key to enhance her spooky image, 2) Every verse will begin on the dominant chord of that minor key, 3) Songs must not (with the single exception of “Paparazzi”) modulate into a different key, 4) Songs must repeat the title enough times (sometimes in excess of 30 repetitions in a single tune!) to be recognized by people who do not speak English, thus overcoming language barrier. The result is a style that is all her own and instantly recognizable. It represents perfect-pitch branding.

MADONNA towers as a master of constant reinvention. She began her singing career as a natural brunette, then dyed it a rich black, then chopped it off to achieve a punk-rocker look. She then bleached it a platinum blonde and highlighted her look with garish red lipstick. Her style of music evolves so routinely that she even dubbed one of her concert series as “The Reinvention Tour.” She morphed from boyish to Marilyn Monroe-style bombshell. She has appeared onstage dressed as a bride, then later in a bustier. Her style of music mutated from the sweet innocence of “Like a Virgin” to the artist that has the most banned videos on MTV. She developed her own clothing line and starred in movies. She remains a force to be reckoned in business, modeling the constant transformation that is needed to adapt to a changing marketplace.

YOU CAN BECOME A ROCK STAR in your own workplace by emulating the actual rock stars of the stage. Be one-of-a-kind, collaborate to create, be a team player, build a unique brand, and constantly reinvent yourself. Just ask “Marvelless” Mark Kamp how he can teach your company that Opportunity Rocks.™.