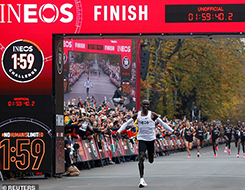 On Oct. 12, 2019, Kenya’s Eliud Kipchoge became the first human being in history to run the marathon in under 2 hours, finishing with 20 seconds to spare. The 34-year-old completed the 26.2 mile course in Vienna with arms outstretched in jubilation over shattering the milestone. Afterwards, Kipchoge said, “I want to inspire many people that no human is limited.” If history is any indicator, he will be proven correct very soon. In fact, I predict that 20 more people will achieve this feat in the next 3 to 5 years.

Three-quarters of a century ago almost everyone accepted the “fact” that no human being would ever run a mile in under four minutes. Doctors wrote books speculating that if a man ran that fast, his heart would stop under the strain. But then, on May 6, 1954, Roger Bannister broke that fabled barrier – and an amazing thing began to happen worldwide. Records began to fall everywhere. 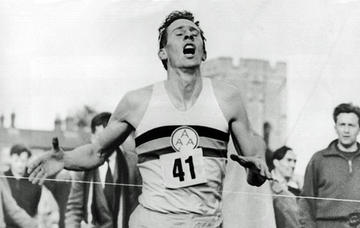 A mere three weeks later a fellow Briton named Diane Leathers became the first woman to run a five-minute mile. Another three weeks later, an Australian by the name of John Landy became the second man to run a four-minute mile and did so faster than Bannister had done a month and a half earlier. The following year, three men broke the barrier in the same race! By the end of 1957 (just 3 and a half years later), 17 people worldwide had run a mile in under four minutes. (To date more than 1300 individuals have achieved the feat, an average of about 2 each month since Bannister set the record.)

Does it make sense to believe that 16 world-class milers (in addition to Bannister) got that much faster in a mere three year span (1954-1957)? Or does it make more sense to believe that the only thing that really changed was what they believed was possible? I’m convinced that “impossible” usually means that no one has thought creatively enough, believed passionately enough, or worked hard and long enough to make something happen. Once someone does the “impossible” (like Kipchoge, and Bannister before him), the deed becomes not merely possible, but the new standard by which everyone else is measured. What mental barriers do you carry?