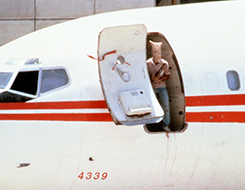 It was Monday morning, February 3, 1969, and Al was relieved to be leaving behind the frosty weather of New England for business in Miami. And since he was already going anyway, he decided to treat his family to the warmth of south Florida, too. Eastern Airlines was flourishing in those days, and Flight 7 was a non-stop from Newark, New Jersey to sunny Miami. But Al would soon learn that today’s flight would be anything but routine. About one-hour after departure, there was a commotion toward the back of the plane. Panicked gasps and muffled screams filled the cabin as a flight attendant hurried toward the cockpit – pushed along by a man holding a seven-inch knife blade to her throat. Al and his wife broke out in a cold sweat, instantly recognizing that theirs was to be the 13th flight in the past year to be hijacked to Cuba. The skyjacker and flight attendant disappeared into the cockpit. Moments later the pilot’s voice reassured the passengers that although they would be making an unscheduled trip to Havana, that everything would be alright. Al tried to calm his wife. But what happened next caught him completely by surprise.

One by one, the ninety-plus passengers on Flight 7 began to whisper to one another, point at Al, and laugh! The laughter became so loud that this disconcerted hijacker leaned out of the cockpit to investigate. He was greeted by thunderous applause and heartier laughter. “What are you laughing at?” he demanded. The passengers laughed even more. Some removed handkerchiefs to wipe happy tears from their eyes. Al saw a Catholic priest and pleaded with him to calm the crowd. The priest, already laughing, laughed harder! Even after the plane landed safely in Havana, then returned to Miami, the passengers were still chuckling, taking the whole event as a gigantic practical joke – all because Al had been on board. You see, Al was famous, and many on board had recognized him as TV’s ultimate prankster, Allen Funt. Nearly a hundred souls belly-laughed their way through one of the most harrowing experiences of life because they thought they were on Candid Camera! They weren’t. It was a real hijacking. But the potentially terrifying experience was made joyful all because of what the passengers believed.

Similarly, the way we all respond to crisis and pain is not dictated by what actually happens to us, but by our perception of it. The passengers on Flight 7 believed a lie I am NOT encouraging that. On the contrary, I urge you in your own struggles to focus on and perceive a greater truth: problems are life’s only means of rapid growth and the best method of learning ever devised. Welcome them as friends, learn all you can from them, and never stop laughing.