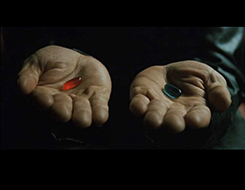 The thesis of the cult-classic film series, The Matrix, is that the world we all perceive is actually a computer simulation fed into the brains of people who are, in reality, held in suspended animation in capsules and are being used as batteries to power the machines who created the alternate reality and rule the real world. The central character, Neo (played by Keanu Reeves), notices inconsistencies and begins to question his reality. He is soon contacted by Morpheus (Lawrence Fishburne) a notorious human outlaw who lives outside the Matrix and actively seeks to undermine and destroy it.

An iconic scene in the first film features Morpheus extending his hands, each holding a pill, one red and one blue. He challenges Neo to choose one of them:

“After this, there is no turning back. You take the blue pill—the story ends, you wake up in your bed and believe whatever you want to believe. You take the red pill—you stay in Wonderland, and I show you how deep the rabbit hole goes.”

Renee Descartes (1596-1650) was perhaps the first to tinker with the idea of a matrix. He began an intellectual quest by assuming the existence of a malicious demon who was able to superimpose an alternate reality over the real world. With this assumption in mind, the mathematician was then forced to doubt everything, including his own existence. Ultimately, he issued his classic conclusion: cogito ergo sum, “I think, therefore I am.” While this mental exercise is far too extreme to be of much use to us, the underlying presupposition is true: our perception of reality is distorted, therefore we have good reason to routinely question our beliefs.

As human beings, to one degree or another, we all spend our entire lives in The Matrix, deluding ourselves with pleasantries and falsehoods to dull the sharp edge of reality. We can’t help it. Like Norman Bates (convinced he is really his elderly mother) in the closing scene of “Psycho,” we grade ourselves on the curve. We tell ourselves assuring little lies, like he did: “Let them see what kind of a person I am. I’m not even going to swat that fly. I hope they are watching… they’ll see. They’ll see and they’ll know, and they’ll say, “Why, she wouldn’t even harm a fly….”

Our lies are usually less blatant, but equally dangerous:

“I’m sure my cholesterol level isn’t very high. No need to check it for another year or two.”

“Surely the boss is happy with my work. He probably frowns all the time because he’s having a bad day.”

“I can stop eating sweets anytime I want. I won’t become diabetic like my mother did. I’ll be careful not to overdo it.

“My husband would never leave me. We’re just going through a rough patch and things will be fine soon.”

“Those little holes couldn’t possibly be termites. I’m sure it’s nothing.”

“Okay, so I’m bending the rules a little bit. I’ll never get caught.”

THE LIE LIBERALS TELL THEMSELVES: “This isn’t the Trump economy. It’s Obama’s wonderful policies that took 8 years to finally kick in.”

THE LIE CONSERVATIVES TELL THEMSELVES: “Gay people aren’t born that way. They decide as adults to be attracted to people of their own sex and suddenly become great interior designers.”

Nobel Prize-winning physicist Richard Feynman said, “The first principle is that you must not fool yourself. And you are the easiest people to fool.” Unless we discipline ourselves to counter our own proclivity for self-deception, life devolves into a series of word games and Jedi mind tricks that we routinely play on ourselves:

“These aren’t the cancerous moles your grandmother had. You can go on with life as normal, now.”

Of course, the great challenge is to train yourself to tell the difference between reality and illusion. You accomplish this in five ways:

FIRST ask yourself, “Is there any set of facts, statistics or events that could cause me to change my belief system?” If not, you’re probably in The Matrix. The inconsistencies between what you believe and what your eyes plainly tell you should constitute your first major tip-off that you’re lying to yourself. Just as Neo did in the movie, you must pay attention to inconsistencies that might otherwise slip by you. Rather than flippantly dismissing them, analyze them as objectively as you can. Look for differences between what you expect to happen (given your belief system) and what actually happens around you.

Many years ago I was the pastor of a large church. There was an elderly man in our congregation who regarded himself as something of a healer and visionary. When one man [let’s call him John] in our church was in a terrible car wreck and lay in a coma for months, he walked into the man’s hospital room with a smile and announced to me and the man’s wife, “I had a vision! John will rise up out of his bed and walk!” A month or two later, John died without ever regaining consciousness. But our resident visionary just went on having and advertising his premonitions, apparently never questioning their validity or divine origin.

There was another woman in my church who carried a vial of olive oil in her purse. She would dab some of it on the foreheads of sick people, pray for them, and pronounce them healed. Of course, those with the flu got better after a few days of bedrest, buttressing her faith in the practice. Others continued suffering from their chronic ailments. These, she said, had actually been healed of the disease but still experienced merely the symptoms in order to test their faith. She admonished them to “claim” their healing and the symptoms would soon subside. They never did. Still others of her “patients” died of their much more serious maladies, which she then declared to be an “ultimate healing” since the person was presumably in heaven and thus no longer ill, again reinforcing her belief. To my knowledge, no one ever got better who was not already expected to fully recover. But no matter. Whether they got better, worse, or stayed the same, her belief remained steadfast.

Leah Remini (co-star of The King of Queens and star of The Exes) used to be a Scientologist. Though a devout believer from childhood, she noticed that the wife of David Miscavige (Scientologists’ equivalent of the Pope) had simply vanished. When she repeatedly inquired about the woman’s whereabouts, she was forced into five years of brainwashing sessions called “thought modification.” Shelly Miscavige, who had been a church dignitary who routinely appeared onstage alongside her husband at Scientology events, has reportedly not been seen since 2007 and no explanation has ever been offered by the church for her disappearance.

Remini also noticed that church members who had achieved “OT-8” (Operating Thetan Level 8, the highest level of spiritual enlightenment recognized by Scientology), signifying that a person was, in all important regards, perfect, were getting excommunicated, castigated and denounced by Scientology officials. Why doesn’t Tom Cruise, John Travolta or Kirstie Alley ever ask the obvious question: If someone has achieved perfection, how can they then be evil? When reality doesn’t meet your observations, it’s time to take the red pill.

SECOND, ask yourself: “Is what I believe just an indication of what I want to be true?” If so, you may be guilty of wishful thinking. It would be healthy to challenge any such beliefs, armed with the knowledge that you’re more likely to lie to yourself in the direction of what you would like to hear than you are to do so in the opposite direction: “I’m not overweight. The camera must have caught me at an awkward angle.” It takes discipline to believe what facts and logic tell you rather than what you would like to believe. When a person finally recognizes the painful truth, we call it “a moment of clarity,” or “disillusionment.” Disillusionment, while uncomfortable, is a very good thing, for the only alternative is to continue living under an illusion. I once spoke with a friend of mine who was undergoing a divorce. She had just discovered that her husband of 18 months had never stopped dating his old girlfriend. “I’m so disillusioned right now,” she said sadly. “That’s good,” I replied sympathetically. She was puzzled. “How is that good?” she asked. I reassured her, “It’s not good that your husband has been cheating on you. That much is bad, but it’s good that you now know the truth.” She was still skeptical, so I continued, “Don’t you wish you’d been disillusioned with this guy 6 months before the wedding?” “I sure do,” she conceded. Disillusionment is good, and the sooner it happens to you, the better, so get in the habit of challenging your comforting beliefs that might just turn out to be illusions.

THIRD, listen to those who know you best. Many years ago, I heard a speaker (I’ve long since forgotten who it was) say, “If one person calls you a horse, ignore it. If two people call you a horse, look in the mirror. If three people call you a horse, buy a saddle.” We all want to believe that our reasoning is sound and our intentions noble, so we rationalize and justify our behavior. However, this often means that we are more successful in deceiving ourselves than we are in fooling those closest to us. Others can still easily spot our flaws. Jesus asked his followers, “Why do you see the speck (of sawdust) in your brother’s eye, but do not see the plank in your own?” On another occasion he asked, “Why do you strain out gnats [from your drinks] while swallowing camels?” A Japanese proverb admonishes, “Though you see the seven defects of others, we do not see our own ten defects.” It has always been human nature to lie to ourselves. If you’ve been repeatedly told that you talk too much, or you’re too passive, or too angry, believe it. Any one person can be wrong, but if people line up to all tell you the same thing, it’s time to buy a saddle. Or, better still, stop being a horse’s rear end.

FOURTH, ask yourself, “Is what I believe just a reflection of my pessimistic nature or low self-image?” On occasion, your mood, belief system or self-image will cause you to lie to yourself in the opposite direction from what you wish were true: “Nobody loves me. I have no friends.” These lies are usually easy to detect, because they’re demonstrably false. Off the top of your head you could probably list several people who count themselves among your friends and/or love you. These lies should be confronted in your mind with an immediate factual rebuttal: “That’s nonsense. I’m loved by my parents, my spouse, and my kids. Jim, Karen and Susan all introduce me to others as their good friend.”

FINALLY, discipline yourself to seek objective information. Force yourself to step on the bathroom scale every morning. Pick up the phone and schedule a physical so you’ll know for certain what your blood pressure or cholesterol readings are. In so doing, you’ll remove your emotions from the equation and get accurate information.

Which will you choose, the red pill or the blue pill? The problem is that you have to choose every day.