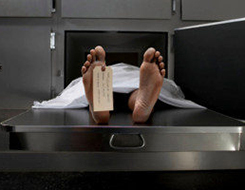 In August of 2014, doctors pronounced dead a Brazilian man named Valdelucio Gonclaves, 54, and summarily dispatched him to the morgue. His family purchased a coffin, published a death notice in the newspaper, planned and paid for the funeral. The dead man’s ears were stuffed with cotton, his feet bound together in preparation for burial, and he was zippered into a body bag. Only then did his brother, present to dress the body for the funeral, notice that the bag was squirming! Gonclaves was raced to intensive care and recovered. He later penned a letter explaining that he viewed his jolt back to life as a religious miracle provided to him by the Blessed Irma Dulce, a Franciscan Sister who is considered in Brazil to be a saint with miraculous powers. “I, Valdelucio, saw death at my feet, but my faith was so great that I was cured,” he wrote. “Before Irma Dulce I said, do a miracle in me, and she heard my prayer.” (Read the article here.) My point is this: while Valdelucio believes this was a miracle, do you?

I suspect that you are more likely to conclude that his doctors made a terrible mistake and that he was alive all along. If miracle-workers can raise a man who’s been “dead” for a few hours, why not a few months? Or years? Or even centuries? Why doesn’t one of them bring Abraham Lincoln back from the dead? Or Napoleon? Doesn’t their failure to do so demonstrate that such “miraculous powers” supposedly wielded by faith healers and saints are not genuine? Why can they only resurrect those whose bodies are still warm? How many other “miracles” do you suppose are actually quite natural in origin? 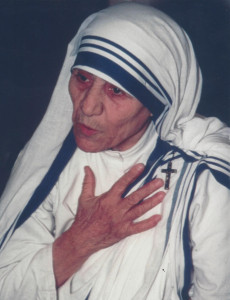 In November of 1980 I traveled to India on a church mission trip where I had the rare treat of meeting Mother Teresa in person. Regrettably, I was far too young (22) and way too ignorant to appreciate the import of that chance encounter. I had no idea who she was (I wasn’t raised Catholic), other than a nun who had gained some measure of renown by moving to the ghetto to fight poverty and disease in India, and I’m still quite shocked that I had about 3 minutes completely alone with this gracious and iconic woman at one of her rescue facilities in Calcutta. “Blessed Teresa of Calcutta” ran various homes for lepers, orphans, etc. and I’ve long since forgotten which one of them I was touring that day when I turned a corner and stumbled upon the future Nobel Peace Prize winner in a hallway.

At the moment I walked up, she was quietly scolding one of her nuns in a language I didn’t recognize. The chastised sister ran away in tears, leaving me to all alone with the diminutive, but nonetheless towering figure in global Christianity. I took the above photo at that time, and made pointless chit-chat with her (and she kindly reciprocated) since I had not expected to meet her and thus had not prepared any existentially-significant questions about the meaning of life. It was for me clearly one of life’s lost opportunities. The other picture was taken of me doing magic tricks for children on the street that same week. (See! I had hair!) 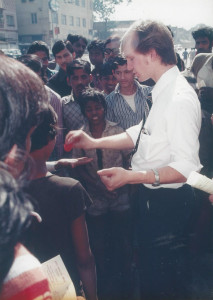 When Mother Teresa passed away in 1997 a movement was immediately afoot to have her canonized (officially recognized as a saint). In order to be designated as a saint a believer must have 2 miracles attributed to him or her, and here-in lay the focus of this blog. In the dark ages, any number of occurrences could be adjudged miraculous. Unexplained events and phenomena were ubiquitous, while news reportage was largely by word of mouth and, of course, without the benefit of video or audio recordings. Today’s world is quite different. Scientific advances have rendered almost all “miracles” fully explicable. “Resurrections of the dead” are now usually recognized as resuscitations made possible by re-starting the heart of someone whose brain had not yet fully shut down, as in the case of the aforementioned Brazilian man.

For this reason, I strongly suspect that the process of canonizing new saints in future centuries will become progressively more difficult, as more and more of the miracles attributed to a given individual turn out to be quite natural, after all.  (Perhaps this is what spurred Pope John Paul II in 1983 to rescind the mandate that the validity of each alleged miracle must be challenged by a skeptical lawyer called the “Devil’s Advocate.”) Mother Teresa is one of the first to encounter this hurdle. While I believe she is as worthy as anyone of the honor of sainthood, and I admire the work she did immensely, the two miracles held forth by her supporters find themselves on quite shaky ground.

The first occurred in 1969 as she was being interviewed by British journalist Malcom Muggeridge for a television documentary. The lighting in the interview room at Mother Teresa’s “Home for the Dying” was deemed inadequate for filming, but Muggeridge decided to go through with the interview anyway, hoping for the best. His videographer, Ken MacMillan, suggested that they try a brand new film developed at Kodak for the purpose of low-light filming, stock that MacMillan had brought with him but had not yet had a chance to test. When the footage was viewed later, the lighting seemed excellent. MacMillan later reported, “I was about to say, ‘Hooray for Kodak’ when Muggeridge shouted, ‘It’s God Light!’”  The latter interpretation – that the light shone directly from Mother Teresa’s very spirit – was widely publicized and launched her to international fame.

The second miracle is equally sketchy. A year after Mother Teresa’s death, nuns in Bengali placed a pendant bearing her image on the chest of a tumor-ridden woman named Monica Besra. The woman recovered, and the Vatican now had its second miracle in hand. However, Besra’s doctors immediately came forward and stated the ill woman suffered from tuberculosis that they had carefully and successfully treated with medication for 9 months. Moreover, she bore a benign cyst (not a tumor). Nevertheless, the miraculous interpretation gained traction and thus the path to sainthood now appears clear for the great Mother Superior of Calcutta. If anyone deserves the honor, she certainly does.

None of this in any way diminishes the decades of compassionate labor Mother Teresa delivered to India’s poor, or her importance to the Catholic Church. Nor does it call into question the sincerity of her faith or the efficacy of her deeds. It does not even disprove the validity of miracles in the spiritual realm, such as the change that takes place in a person’s behavior as a result of faith. Those things are inherently beyond the scope of science.

What it does do, however, is make intellectually-honest people wonder how many of the miracles attributed to the other 5000 saints over the past 2 millennia might be completely natural in origin. This is my question: If one of the most celebrated dedicated, and extraordinary Christians of the 20th century couldn’t muster even one indisputable miracle, is it realistic for us to believe that they’re happening regularly to ordinary people like us? As is usually the case, we do not believe because of the evidence we see around us, but because we feel we are supposed to believe.