THE ESSENTIAL DIFFERENCE BETWEEN A BOSS AND A LEADER 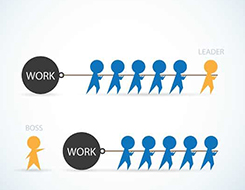 A boss and a leader are not the same things. In fact, they’re almost opposites. Though millions wear both hats simultaneously, it’s quite common to function for decades as a boss without ever becoming a leader. Or, for that matter, you might be an effective leader without ever wearing the title of boss. The difference?

A boss is one who deploys a series of carrots and sticks, perks and threats, benefits and punishments to leverage employees into doing tasks they would rather not do, all in hopes of convincing staff members that their lives will be less miserable if they do as they’re told than if they disobey or goof off. The beleaguered boss must take care to remind them of this fact on a regular basis lest the effects of the threatened consequences (or promised benefits be forgotten and wear off. The underlying subtext of almost every interaction with employees remains the subtle reinforcement of this point. The enforcer toils under the assumption that workers do not want to do their jobs; they must be pressured into doing them using whatever tools might be utilized to this end. A boss is the personification of the bumper-sticker slogan, “I’m not a nag; I’m a motivational speaker!” To a boss, the terms are synonymous.

Moreover, the boss must make good on every promise and threat or the power of the position will be reduced or eviscerated altogether. A warning that goes unenforced even once decreases the influence of all of them. Whatever undesirable behavior goes unpunished is, in effect, being promoted. If a solitary employee comes in late and the boss says nothing about it, before long lots of employees are coming in late. For the boss, a workday resembles a never-ending game of Whack-a-Mole. Never can he take his eyes off of his crew. Infractions must be pounded into submission the moment they pop up. If the boss tires of the task for even a short while, the moles learn that they can act with impunity, popping out of their cubicles to slip out early, or ducking inside them to enjoy a bit of online shopping during work hours, or chatting with friends when they should be working. The prospect of taking a day off or a vacation becomes a nerve-wracking calculation for the boss, who must estimate how long the warden can be away before the inmates will burn the establishment to the ground.

If the boss is playing eternal Whack-a-mole, the workers are doing perpetual math. Each employee is pressed into a moment-by-moment cost-benefits analysis to determine which is worse: the distasteful act of doing as he or she is told – mitigated by any enticements offered – or shirking and enduring the consequences (if, indeed, the boss chooses to punish the infraction). Should I mop the floor and reap the benefits of not being yelled at? Or should I hide in the break room surfing the net on my phone and risk incurring the boss’s wrath? Or will she even notice? Or care? Or say anything? If the boss says nothing, but becomes internally angry, will I pay the price later? What is the boss’s mood today? How close am I to placing that final straw upon the proverbial camel’s back? Should I make my designated sales calls today and potentially (but not certainly) make more money this week? Or slip out to a movie, pretend I was making sales calls (thus making no money, which might have been the case anyway) and hope the boss doesn’t notice my poor sales numbers? Should the teacher show up for cafeteria duty as assigned or hide in the teacher’s lounge enjoying a little peace and quiet? What will be the cost if the Principal wanders in unexpectedly? Does she even know that today is my day for cafeteria duty? Should the pastor make hospital visitations today? Or skip them altogether and hope everyone assumes he was busy writing Sunday’s sermon?

The maddening math never ends as the constant computing exacts a toll on the employee’s psyche. Every few minutes the worker must reweigh the pros and cons carefully against one another by placing them on opposing ends of an imaginary scale, fearfully aware of the fact that the balance shifts ever-so-slightly minute by minute. The pendulum swings as the boss either gets more and more suspicious on the one hand, or flies off to Maui for two weeks, on the other, or as the rent comes menacingly due or a tax refund temporarily relieves the financial pressure. The advantages ebb and flow daily while the consequences shift ever-so-slightly every few seconds as the threat of incurring trouble swings as unpredictably as the S&P 500 on a Friday afternoon.

A leader, on the other hand, is one who inspires employees to do as they should out of their own personal desire to do so. President Dwight Eisenhower delivered the best definition of leadership I’ve ever encountered: “Leadership is the art of getting someone else to do something you want done because he wants to do it.” There, in a nutshell, the General summarized the essence of leadership and highlighted its clear differences from the role of a boss. A boss seeks to impose his or her will on the employee; the leader finds a way to fan the flames of passion within each person so that they do what their leader desires because they, themselves, profoundly want to do so.

Though this approach may emit the stench of manipulation to the uninformed, the process of exciting employees’ passions lies at the very core of leadership. While the timid might recoil at the notion of arousing a desire in others to do what their leader wants, the undeniable fact remains: highly influential people are those who persuade other people to see and do things the leader wants done. Parents accomplish this with children, don’t they? It is one thing to angrily demand that a four-year-old eat his veggies. It is quite another to plop the child in front of an episode of Popeye, allowing the boy to observe the powerful transformation resulting from a single serving of spinach. An angry teacher may yell at students who fail to do their homework, or she may instead show them slides depicting the living conditions of people who didn’t take their schooling seriously. A coach who orders players to do endless wind sprints will get less from his athletes than one who reminds them of the glories and perks associated with winning the championship. Said another way, leaders lead. Some wag quipped long ago that “he who thinks he is leading, but has no one following, is only going for a walk.” A person is not a leader simply because someone inscribed the title “Supervisor” or “Manager” or “CEO” on their job description, door, or business card. A person is a leader in direct proportion to how many people are following and the degree to which they are willing to follow. They will follow only when their desire to do so is aroused.

The leader accomplishes this not primarily via the promise of tangible rewards, but by appealing to nobler goals, awakening humanitarian instincts, or engendering such love and respect from those around that no one is willing to let their standard-bearer down. The military leader reminds the troops of their duty to their country, the righteousness of their cause, the vulnerability of the young and weak in the face of a ruthless enemy. The police chief raises the specter of the societal and personal cost that will be incurred if cops fail to do their best, and of the benefits of law and order for all if they succeed. A school superintendent speaks often of the power and responsibility of teachers and staff to alter the trajectory of students’ lives from one that leads toward poverty or prison to one of good citizenship and prosperity.

The CEO of a charity reminds volunteers of the philanthropic goals sought and achieved. They are regularly reminded that their work will impact society for generations to come. A business owner holds before employees the opportunity to become their absolute best, to be admired for their excellence, to operate at the peak of their potential, to be a member of a winning team or to share a role in something truly remarkable. The reward for the leader’s efforts is the freedom to take a day off or a vacation or even to retire with the knowledge that those who remain behind will continue to pursue the vision with the same vigor and standards as before. The mere boss, alas, can never stray far from his or her smartphone and must check emails constantly. Each arriving text strikes fear in the boss’s heart, perhaps bringing news of fresh disaster. He wonders whether his people are working or shirking. She doubts that her employees are laboring as hard or as well as when she is peering over their shoulders. There is little doubt that when the cat is away, at least some of the mice will play. Such is the plight of the pitiful, hapless soul who fills the role of boss while never achieving (or even aspiring to achieve) the status of leader. 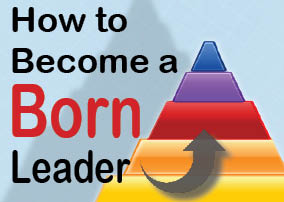 The title of my latest book, How to Become a Born Leader, describes an internal contradiction and begs the question, “How can you become something as an adult that you had to be born as decades ago?” The title is intended to highlight my belief that there really is no such thing as a born leader. On the contrary, “born leader” is the descriptor that will be assigned to you by uninformed people after you have spent years internalizing and exhibiting all of the qualities of a true leader. No one is born with them; they are carefully honed and developed in the crucible of daily experience. They are perfected as you ascend the six stages of what I call “The Leadership Pyramid.”

It should be noted that I do not envision my pyramid as the classic flat-sided sort found on the Giza Plateau in Egypt. Rather, it represents the type called a Ziggurat that ascends in defined levels, like huge stair-steps, similar to those found in Mexico. Many climb a level or two and remain there forever, content to dwell on their lowly plateau. They enjoy the few benefits of mid-level management but have no aspirations to put in the time and effort to ascend higher. Or, perhaps they are unaware that almost any individual, properly trained and motivated, can climb to a loftier stage, enriching the lives of many others even as they, themselves, are edified. Only a few will ascend to the pinnacle of the pyramid, embodying all of the qualities of a great leader. Some middle-managers will admire the titans from afar, having eschewed the hard work necessary to reach the zenith of the pyramid and enduring the pain of regret that they chose the easier but less rewarding path. The rest will stand in awe from below and exclaim, “There’s a born leader if ever there was one!” And they will be wrong. There’s no such thing as a born leader. There are those who dared to climb, and those who either chose not to pay the price of the ascent or who never realized that they possessed the potential for greatness.

(You’ll get a scratch-off code good for one viewing only. Stop and start allowed.)