THE LAST VESTIGE OF JIM CROW: REPEAL THE DAVIS-BACON ACT 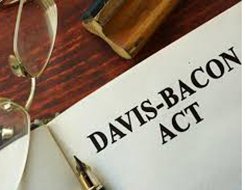 DISCLAIMER: Billy Riggs does not speak on (or even address) this topic in any of his public presentations, but his interests are wide and varied so he sometimes uses this blog to express views he finds interesting or noteworthy.

“Increase the Minimum Wage!” echoes as a rallying cry for many who genuinely want to help the poor. But historically, doing so has generally done more harm than good. The minimum wage, ironically, was established by Jim Crow racists in 1931 for the stated purpose of harming the poor, specifically black men. The Davis-Bacon Act of that year was designed to price them out of the workforce. In arguing for its passage, Representative John Cochran (D-MO) stated, “I have received numerous complaints in recent months about southern contractors employing low-paid colored mechanics getting work and bringing the employees from the South.” Representative Miles Clayton Allgood (D-AL) similarly complained, “That contractor has cheap colored labor that he transports, and he puts them in cabins, and it is labor of that sort that is in competition with white labor throughout the country.” Once passed, the new minimum wage brilliantly fulfilled its purpose of keeping black unemployment high, and it has the same effect today, though the reputed effect has – quite incredibly – swiveled 180 degrees.

Countries like Sweden, Denmark and Switzerland, repeatedly hailed as models of modern liberalism, have no minimum wage laws and generally boast a far better employment rate than the United States, and with much higher median wages. Moreover, the lowest unemployment ever recorded in the United States was reached during the Coolidge administration at 1.8% immediately before the institution of a national minimum wage in 1931. Of course it was. The Davis-Bacon Act was specifically intended to raise unemployment by restricting competition between laborers and forcing wages higher for those (white men) lucky enough to still have jobs.

For Progressives of that era, establishing a binding minimum wage served the dual eugenic purposes of

1) weeding the “unfit” from the workforce, where they could be segregated into remote areas and sterilized and,

2) raising the unemployment rate to the point where potential immigrants would be discouraged from entering the country.

British Progressive Sidney Webb, co-founder with his wife of the ultra-leftwing Fabian Society and coiner of the term “collective bargaining,” stated unambiguously the purpose of unionization and the establishment of a minimum wage. In the Journal of Political Economy he wrote, “Of all ways of dealing with these unfortunate parasites the most ruinous to the community is to allow them to unrestrainedly compete as wage earners.” He was making reference to the fact that black men in those days were successfully competing for jobs precisely because they were willing to work for lower wages.

The white (presumably racist) boss wrestled with a conundrum: should he hire a white man at the prevailing wage or an (“undesirable”) black man who was willing to do the same job for less? Torn between loyalty to his race and his financial self-interest, many bosses’ business sense overrode their racist instincts. Capitalism became the black man’s best friend. (For this reason, those suspicious of Capitalism and those who promote raising the minimum wage were one and the same then, just as they are today.)

The establishment of the minimum wage in the Depression era effectively removed black Americans’ bargaining chip and thus culled them and other so-called undesirables from the workforce. By forcing employers to pay a wage that was higher than market forces would dictate, the “unfit” (blacks, Irishmen, women, the unskilled, the mentally ill, etc.) were robbed of their competitive advantage to compete for jobs at lower wages than whites. Employers, no longer having an economic incentive to hire minorities, reasoned, “If I have to pay the higher rate anyway, I might as well give the job to the white guy.”

Imagine that the government passed a “minimum new car price” law and set that price at $65,000. What would happen? No one would buy a Ford Fiesta or a Chevy Spark; that’s what. It would destroy the auto industry. Most people would use public transit, and the well-off would say, “If I have to pay for a luxury car, anyway, I’m certainly not coming home with a Nissan Versa.”

Similarly, when the minimum price of labor is established by government, everyone selects the more skilled laborer over the one that needs the job the most (and who would be happy to get the work at a lower wage). The poor, uneducated and unskilled are hit hardest. No surprise there. Such was the motive for establishing the “prevailing wage” during the Depression in the first place. Since a lot of people were losing their jobs anyway, they passed that evil law to ensure that it would be black men who became unemployed, not whites. As a result, while black and white unemployment rates were similar prior to the establishment of a minimum wage, they began to separate thereafter. This problem persists today, as the black unemployment rate remains at almost double that of whites. The correlation between a high minimum wage and higher unemployment among minorities is almost universal.

In early 2016, Walmart canceled plans to open two stores in the poorest sections of Washington, D.C. that would have provided hundreds of jobs for residents, most of whom are black. Walmart representatives cited as their reason the city’s hopes to raise the minimum wage from $11.50 per hour to $15.00 in November. Now, instead of making $11.50 per hour, due to the threat of an increased the minimum wage those hundreds of poor people will make nothing. Rather, many young men and women will hang out on the streets and get into mischief rather than develop vital work experience, habits and skills. No wonder the unemployment rate of black youth is about 25% there. That’s why the minimum wage was created. It is still fulfilling its nefarious purpose.

The above arguments do not even address the issue of human rights. Doesn’t anyone have the right to work for less if he or she wants to? If Colin Powell will deliver a convention keynote speech for $80,000, shouldn’t I have the right to say to the meeting planner, “I’ll do a speech for one tenth of that amount?” And shouldn’t some other professional speaker be allowed to discount further than that? And shouldn’t someone just starting out in the business be allowed to offer to do it for $500? Or for free? Does someone else’s supposed right to earn a “living wage” somehow nullify my right to trade my services for less than that if I believe it is to my advantage to do so?

Do workers’ rights to engage in collective bargaining obviate an isolated worker’s right to individual bargaining? Establishing a “minimum honorarium” for public speakers at $15,000 wouldn’t help struggling speakers, would it? It would put them out of business. Moreover, most conventions would simply never hire a paid speaker ever again. Once the crazy law was repealed, the profession would thrive again. The same would likely happen in all businesses with the repeal of the Davis-Bacon Act.

THE REAL WORLD EFFECTS OF A MINIMUM WAGE

Those who believe increasing the minimum wage will help the poor make the mistake of focusing only on the theoretical size of the paycheck that would be pocketed by workers in a perfect world, while ignoring the law’s many negative effects on actual workers in the real one. The business model envisioned by proponents of a high minimum wage is one in which a fat cat business owner (who hordes his filthy lucre in cash in a mattress, safe, cookie jar or checking account) simply starts writing bigger checks to his or her employees but makes no other changes to his behavior. In such an artificial scenario, the result would certainly be good for struggling employees and the economy at large. But the number of bosses who fit this description must be close to zero. In reality, almost all affected companies fall into one of the following nine categories.

• The business owner who chooses to lay off 10% of his workforce, then demands 10% higher productivity from the remaining 90%.
• The owner who decides in light of higher payroll demands that it finally makes sense to invest money in automation and replace many of his workers with robots. This trend is already strong in the states that have raised the minimum wage to $15 per hour.
• The boss who delays purchasing new equipment or cancels plans to build a new facility or expand an existing one in order to divert those dollars to higher wages. This results in job losses among those who work for construction companies and equipment manufacturers, and the negative ripple effect is felt far and wide.
• The company that passes on the higher cost of labor directly to its customers, leaving the latter with less money to spend on gas, food, toys, trips, etc. Take, for example, a minimum wage earner at a grocery store. While she brings home more money, she must also pay more for her own groceries because the price of production at the farm level, transporting goods to market, stocking and selling them has gone up across the board. The result might be a wash for her. Phrased another way, a pay increase for the thousands who work at Walmart effectively translates into a pay cut for the millions who shop at Walmart, many of whom are Walmart employees, as well.
• The corporation that is motivated by the higher cost of labor to outsource jobs to other states or countries. In April of 2016 California raised its minimum wage from $10 per hour to $10.50 effective January 1, 2017, but also declared that it would gradually increase it to $15 per hour by 2022. Almost immediately, jobs evaporated. American Apparel, the largest clothing manufacturer in Los Angeles announced it was moving 500 jobs to another state. Another clothing manufacturer, Joompy, made plans to import its goods from other countries. The owner, Felix Seo, declared, “It will be impossible to make clothes in Los Angeles.”
• The corporation that simply moves its headquarters overseas in search of cheaper labor, laying off all local employees.
• The company that cancels or pares future hiring plans.
• The company that is running on such tiny margins that it is forced to close down altogether.
• The business owner who now earns less, and therefore puts less money into stocks and bonds. The effect is to reduce stock prices broadly and negatively impact pension funds and retirement accounts.

In each of the first 8 cases, the effect of raising the minimum wage is to harm the poor. In the ninth the victims are union members, the middle class and the upper classes.

The logical faux pas committed by those who support raising the minimum wage is to simply ignore the fact that doing so helps only a comparatively tiny number of low wage earners even as it lays waste to a much larger number of them. Moreover, it produces negative effects throughout the economy that are difficult to quantify, but are at best a mixed bag for the poor. In reality, the only way to truly help the poor is to create such a vibrant economy that demand for their limited skills rises. When the demand rises, their wages will rise as employers compete for employees. Let’s hope lawmakers have the good sense to repeal that Jim Crow anachronism, which would give a boost to the poor and to the economy.