THE VIEW FROM THE PEANUT GALLERY 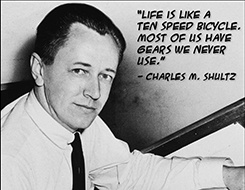 The year was 1935, and an eighth-grade boy whose uncle had nicknamed him “Sparky” was doing even worse than usual. As though being a shy, friendless nerd weren’t bad enough, Sparky struggled mightily in school. He flunked algebra that year. He also received an F in English and Latin. Astonishingly, he received a grade of zero(!) in physics, by far the worst score ever received in that school. He flunked every class that year, and was forced to repeat the grade. He eventually made the golf team at Central High School in St. Paul, Minnesota, but lost the most important match of the year, relegating him to the losers’ bracket. True to form – wouldn’t you know it? – he lost there, too. He was a loser’s loser. It wasn’t that other people hated Sparky; they just didn’t notice him. He was invisible. He never asked a single girl out on a date during those years. He was terrified of girls. His only talent seemed to be for drawing. As a senior, he submitted some of his work to his high school yearbook, but was rejected again.

Far too dull a young man for college, Sparky decided to become a professional artist. He threw his heart and soul into an application to the Walt Disney Company to become a cartoonist, but his portfolio was politely turned down. He just wasn’t good enough. Unable to find a job, Sparky moved into a spare bedroom over his Father’s barber shop, and began writing a cartoon strip for his local paper, the St. Paul Pioneer Press, called “Li’l Folks.” Unable to make ends meet, he requested a raise, but was turned down again. He quit.

He was accustomed to rejection by now; he even expected it. As a last resort, Sparky turned to drawing his own self-portrait, as it were. He began writing his own autobiography… in cartoons. He would use his pen to tell his story, the tale of a young boy with great hopes and dreams that were perpetually dashed to pieces on the hard rock of reality, the seemingly never-ending saga of a young man whose existential angst followed him like a dark cloud. He drew himself as an anguished, tortured soul who could do nothing right: a boy whose kite would never fly, a boy whose baseball game was invariably rained out, a boy who sat alone each day in the cafeteria gazing longingly at the little red-haired girl he could never muster the courage to speak to. He was the boy who – after fifty years of trying – never once got to kick the football out of Lucy’s hand. By now you’ve figured out that Sparky was Charles Schulz, the would-be loser who learned that if you have even one talent and a willingness to persevere, you can succeed. But maybe you never knew until today that Charlie Brown and Charles Schulz were one and the same.