WHY WE BELIEVE WACKY THINGS (PART I)

They say that seeing is believing, but new research suggests that isn’t so. To the contrary, believing is seeing. We do not believe things because we see them; we see things (even if they’re not actually there) or refuse to see them (though they may be right under our noses) because we already believe in something that contradicts the empirical evidence before us. In a logic-be-damned feedback loop, we choose our beliefs for personal reasons, then selectively imagine, reinterpret or cherry-pick data to confirm those beliefs. If being an illusionist for the past four decades has taught me anything it is the staggering capacity of the human mind for self-deception. All of us (myself included) can be fooled, and quite easily. Astonishingly, we are simultaneously both the flim-flammer and the flimflammed. The grifter and the mark are one and the same. We proffer snake oil by spinning wild tales in the confines of our own minds, then willingly suspend disbelief and eagerly slather it on or chug it down. We have met the enemy: the one gazing back at us in the mirror. 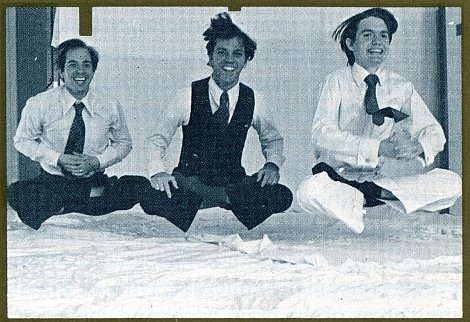 The photo above, which was featured in a brochure about transcendental meditation almost 5 decades ago, was probably taken at the Maharishi Mahesh Yogi’s “University” in Fairfield, Iowa. These three young men, persuaded of the veracity of the Maharishi’s claim that he could levitate while in a meditative state, studied the art of “flying” under their Yogi’s tutelage. While at first glance the photo looks impressive, the method by which they accomplished this “feat” is far from paranormal. The three men simply assumed the cross-legged lotus position and hopped (no easy task, by the way). The photograph was snapped when the three men were at the peak of their jump (watch video of this ongoing nonsense below).


This is why the men’s hair and clothing in the (top-of-page) photo are disheveled, having remained momentarily suspended even as the men’s bodies had begun descending back to earth. Though you would be tempted to dismiss the three young men as idiots, the one of your far right is none other than John Gray, author of the immensely successful Men Are from Mars, Women Are from Venus books, CDs and lectures.

This man, despite a high IQ and extensive education, spent nine years(!) trying to levitate and teaching thousands of people that they could do so, too. We can only imagine the strange conversation he carried on within himself each time he “flew:” I think I hovered there for a split-second! I wonder if anyone else noticed. Just a few more hops and I’m sure to remain in the air. I’ve almost got it. Can’t give up now right when I’m on the verge of a breakthrough!

Needless to say, no TM adherent ever levitated even for a fraction of a second. Moreover – and you can take this right from the magician’s mouth – no one can truly levitate. All we magicians can do is create the illusion that levitation is possible. It’s just a clever trick. But levitation is just one of thousands of wacky beliefs to which otherwise sane and intelligent people tenaciously cling. The list of false beliefs is almost endless. But my interest is not so much in what we believe, but why we believe crazy things.

WHY WE WANT TO BELIEVE IN CRAZY THINGS

Neuroscientists during the past two decades have discovered that the brain’s default position is to believe in a proposition. Try an experiment. I have listed below a series of statements, each one of which is obviously true or false. Please read each one silently and then assign a T or an F to each one:

• Circles are round.
• People drive around in dishwashers.
• Squares have three sides.
• Tortoises travel very fast.
• Light travels very fast.
• People talk to each other on telephones.

A     s you engage in this seemingly pointless exercise you might notice what scientists have documented (and what I experience when I take this “test”): no matter how blatantly false a statement is, it takes slightly longer to assign an F to a patently false statement than it does to assign a T to an obviously true one. Studies show that the “False” assignation takes place in a different and more remote part of the brain from a diagnosis of true, and therefore takes longer. This sluggishness to assign falsity to any given statement (even if only delayed for a fraction of a second in such obvious cases as those above) is merely the tip of the iceberg, revealing that the brain is wired to believe. Our undisciplined brains are eager to believe and loath to doubt. Just as General Motors manufactures cars, the brain manufactures beliefs. The brain then searches for evidence (real or imagined) to support the belief.

1) adopted because a coincidental occurrence apparently confirmed the belief. (“I took a whole bottle of Vitamin C and my cold went away in three days.” “I had a dream that my mother died and I learned later that day that she was in the hospital.” “I put $20 in the collection plate and the next week I got a $40 raise!”) or

2) accepted because they are more comforting than disbelief (“I have a guardian angel.” “I am a wonderful person.” “I am smarter than average.”) or

3) manufactured because they endow the believer with a sense of uniqueness, superiority or importance (“I was abducted by aliens for 2 weeks back in the 70s. Yes, of all the people on Earth they chose me.” “The government is trying to kill me because I know what they’re up to.” “I’m a Capricorn, which means I am a natural leader.” “Very few people possess my ability to talk with the dead or read minds.”) or

HOW TO CORRECT YOUR WACKY WORLD VIEW

Once the lens is colored, almost everything we see is tinted and tainted, and is thus viewed as “proof” that my beliefs are correct. Worse still, it is the full-time occupation of the subconscious mind to bring the circumstances of one’s outer world into conformity with one’s inner illusions. In other words, if I can’t rid myself of my illusions, I will subconsciously create circumstances that match my false beliefs. Thus we are mysteriously driven to engage in behaviors that turn our beliefs into self-fulfilling prophecies. For example, a classmate tells a young boy he is ugly and he has no reason to doubt it. Now, as a man he still believes he is ugly so he lacks confidence, thus becoming less attractive to women. Their rejection of him (based solely on his hesitancy to make eye contact or engage them in conversation) confirms that his belief in his own homeliness was indeed true, and his conviction deepens, starting the cycle over again and turning it into a downward spiral. For this reason, I’ve devoted much of my speaking career to helping people become “dis-illusioned,” rejecting all false beliefs in favor of reality. There are three steps to accomplishing this:

2) Ruthlessly compare your beliefs to empirical objective data. What do the actual “facts on the ground” indicate? Do they really support my beliefs? Or am I just imagining it?

3) Test your fears repeatedly to see if they are real or imagined. Walk right up to that attractive woman, smile and talk to her. Does she respond as though you’re ugly? Even if she does, will the next 20 you talk to do the same? After all, one woman’s response might be a reflection of her bad day (or bad manners), but it takes more than one to be a representative sample.

Almost nothing is more important than getting yourself DIS-illusioned.